How can you get your pharmacist to fill prescriptions with authorized generic drugs? It's a lot harder than you might think, but worth the effort.
Why Won’t Pharmacies Fill Prescriptions with Authorized Gene...
4.4- 136 ratings
Drug Side Effects

For years the FDA has maintained that:

“A generic drug is a medication created to be the same as an existing approved brand-name drug in dosage form, safety, strength, route of administration, quality, and performance characteristics.”

The key words are “the same as.” How would you define the same as? We suspect that many people would conclude that if something is the same as something else it would be identical.

That is not the way the FDA defines “the same as.” For one thing, the FDA allows the pills to use different “inactive” ingredients. That means different fillers, binders, coloring agents and even a different formulation or release mechanism.

When a brand name pharmaceutical loses its patent, other manufacturers can attempt to copy that medication. They have to reverse engineer it, though. That’s because the company that created the original product does not have to share any proprietary information with generic manufacturers. The original manufacturer may also continue to hold a patent on the formulation technology, even if it loses the patent on the chemical compound, known as an active pharmaceutical ingredient (API).

The FDA requires bioequivalence data showing that the generic drug is absorbed in a close approximation to the brand name drug. But the blood levels of the generic do not have to be identical to the original medicine.

One example of reverse-engineering involved the antidepressant Wellbutrin XL 300. A generic manufacturer wanted to bring out a similar timed-release version. Although the patent on the API had expired, there was still an active patent on the membrane technology that allowed the active ingredient, bupropion, to be absorbed slowly into the body.

The generic manufacturer had to come up with a different release process. It chose a matrix formulation. The drug was not absorbed in a similar manner as the original brand name medicine.

We badgered the FDA for five years before the agency admitted that the generic Budeprion XL 300 was not “bioequivalent” to the brand name Wellbutrin XL 300. Here is a link to that sad saga in the FDA approval process. 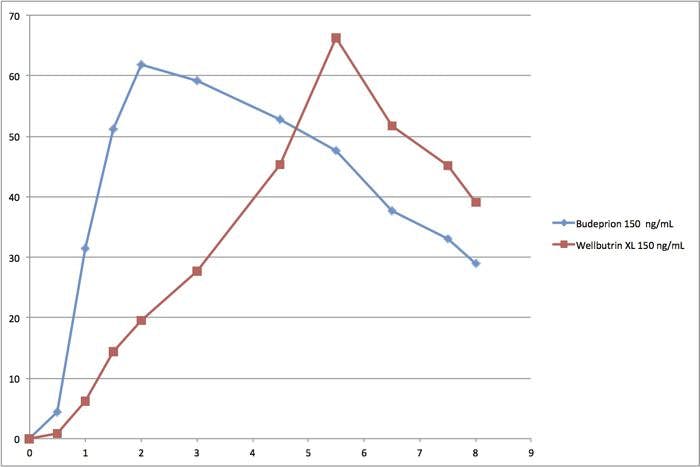 The generic formulation (Budeprion XL 150, aka bupropion) reaches peak blood levels in less than 2 hours (blue line). The brand name Wellbutrin XL 150 doesn’t reach peak blood levels until nearly six hours after it was swallowed. The FDA maintains that the generic form of bupropion has “performance characteristics” that are “the same as” the brand name, even though they are absorbed into the bloodstream quite differently. But that may not dovetail with how patients feel.

A reader shared this experience regarding generic bupropion with us earlier this year:

“When my manufacturer of this generic [antidepressant] drug was changed, I started having massive PVCs [premature ventricular contractions]. When I went back on my original manufacturer of this drug, the PVCs stopped! The pill that causes me to have PVCs is imprinted with: A 101.”

Another reader offered this:

“Are you still running tests on generic bupropion? I have a feeling mine (150XL) (A101) is not working properly. I noticed a significant change in mood and return of symptoms after being switched to it from a different 150XL generic.”

The FDA has not responded yet to our concerns about this situation.

What About Authorized Generic Drugs?

“…the exact same drug product as the branded product.”

We will let you appreciate that subtle but significant difference in wording.

Here’s one way to think about it. Coca-Cola is the brand name beverage you are familiar with. If another company tried to duplicate Coke, it would have to reverse engineer it. The best the generic manufacturer could do is call its beverage a cola soft drink. It might be similar but not identical to the original formula Coca-Cola.

If the Coca-Cola company did a deal with a generic manufacturer of soft drinks and gave that company the secret formula, this “authorized generic ” cola version would be the exact same product as Coke without the brand name on the bottle. It might even be made on the Coca-Cola production line.

Of course, the Coca-Cola company has no incentive to do such a deal. But when brand name drug companies lose a patent on a medicine, they do have an incentive to continue to compete with other generic drug manufacturers. That is why they allow other companies (and sometimes their own subsidiary companies) to sell authorized generic products that are indeed identical.

Because of scandals in foreign manufacturing and the lack of FDA oversight during the pandemic, some patients have become suspicious of generic drug quality. Others have experienced therapeutic failures or side effects from “standard” generics. That’s why they have been seeking authorized generic drugs. That has aggravated some pharmacists.

Can Your Pharmacist Fill Prescriptions with Authorized Generic Drugs?

This reader wants to know why most pharmacists won’t fill prescriptions with authorized generic drugs:

“Regular” generic drugs are often reverse engineered. That is to say, the manufacturer tries to figure out how the brand name company created the original medicine. That information is considered proprietary.

In her best-selling book, Bottle of Lies, Katherine Eban describes the process of reverse-engineering:

“A brand-name drug, no matter how complex or difficult to make, inevitably follows a recipe, such as mix fifteen minutes, granulate, mist until ingredients reach 4 percent moisture content, mix again for thirty minutes. Making a generic version, however, requires figuring out a different recipe, ideally one that is faster to make but produces a similar result. That effort of reverse-engineering is undertaken by process chemists.”

Katherine goes on to describe Rajiv Malik, a process chemist who had worked at the Indian drug company, Ranbaxy. Rajiv was head of formulation development and regulatory affairs. He had mastered the art of reverse-engineering generic drugs based on the brand name formulation.

The book describes Rajiv’s effort to copy the brand name acne drug Accutane. Ranbaxy was planning to market it under the name Sotret. There was only one problem. As production ramped up, the generic drug wasn’t dissolving properly.

Katherine describes what happened next:

“Given the circumstances, the FDA’s regulations required Ranbaxy executives to withdraw the drug from the market and suspend making it until the failures could be remedied…

“The push for profits won out. They chose to continue the launch and conceal the problems from regulators, even as they returned to the laboratory in search of a solution.”

This pharmacist lost it when asked to fill prescriptions with authorized generic drugs:

“After reading your newspaper column about authorized generic drugs I had to fill a prescription. I saw the pharmacist at my local chain drugstore and asked him about filling it with an authorized generic. I even mentioned the article in JAMA Internal Medicine (Jan. 25, 2021) that was in your column.

“He blasted me so angrily. He insisted that all of their prescriptions, including generics, are authorized by the U.S. government. Nothing on the web has any validity, including the article in JAMA Internal Medicine. End of message. Wow! His limit had been maxed.”

Another pharmacist brought up the problem of insurance:

“As a pharmacist for over 40 years I can tell you the problem is most likely due to insurance reimbursement. Insurers will quickly latch onto the cheapest generic available, authorized or not, and reimburse according.

“Keep in mind that all generics are approved by the FDA. Authorized generics simply have the stamp of approval from the brand manufacturer, most likely due to a financial agreement.

Pharmacists are incredibly busy. They barely have time to fill “regular” prescriptions. Asking them to find out who makes a particular authorized generic drug is time consuming. Then getting a pharmacy chain buyer to order it is even more problematic.

Finding a list of authorized generic drugs can also be a challenge, and we don’t know of any list that is complete. However, you will find the best list we could assemble on our website at this link. You can also find other ways to access affordable brand name drugs in our eGuide to Saving Money on Medicines. Look for it in the Health eGuides section of the website.

Not all medications have an authorized generic available. If you find the drug you are looking for, you will need to ask the pharmacist to order from that manufacturer specifically. Independent pharmacies may be more willing to do this than chains.

Rate this article
4.4- 136 ratings
About the Author