What Can A Woman Do To Kill Her Sex Drive?

Mismatch in sex drive and desire often causes couples great distress. Many think men want sex more than women. Here are many stories about female sexuality.
What Can A Woman Do To Kill Her Sex Drive?
3.9- 257 ratings
Drug Side Effects

This article was written several years ago in response to a question from a visitor to this web site. Since that time we have received nearly 400 comments from other visitors to this page. Many are heartbreaking. It is clear that a great many women are experiencing frustration because their partners have a low libido or zero interest in sexual activity. These women think that the only answer to this dilemma is to suppress their female sexuality. Many of these women are relatively young. We find that tragic. But we also understand that many people are willing to sacrifice sex to maintain their relationship.

Mari responded to one of the women who was trying to suppress her sexual urges:

“Your man sounds like he has low testosterone. Make sure he gets tested. Low testosterone is a medical problem that causes complications like brittle bones (osteoporosis), heart trouble, impaired mental function, and, of course, reduced or absent sex drive and sexual dysfunction.

Here is another woman’s reaction to a similar concern:

You Are NOT Alone!

Q. Wow. After reading dozens of other posts to this website I can’t believe so many others know what this is like. My sex drive is slightly above average. My boyfriend’s is well below average. Other than the lack of sex my relationship is perfect.

I wish this one thing didn’t hurt so much. We’re both in our mid 30’s and healthy. He just doesn’t desire sex. Apparently this has been an issue for him before. On average we have sex once every 6 weeks or so. Its driving me crazy. At this point once a week would sound good to me.

It hurts so much to feel so undesired. Even when we do have sex it’s only to please me. The sex is really good when it happens. Every time we do I get my hopes up that it’ll be more frequent but my hopes are always crushed. Between rejection and knowing sex does so little for him I want to give up. That’s why I’m searching for something to kill my sex drive. Never could I have imagined this would be my life.

A. It has surprised us how many women have experienced the same problem you are going through. It is almost as if there is some environmental exposure that is dampening desire of millions of men. To see what other women are going through, here are two links on our website:

We are always reluctant to suggest strong medications that might dampen desire. This seems like a terrible solution to what appears to be a growing problem in America. Suppressing female sexuality with powerful drugs makes no sense to us.

Most of the antidepressant medications such as citalopram, fluoxetine, paroxetine, sertraline and venlafaxine will have an impact on male and female sexuality. Adverse reactions include dampening of desire (low libido), difficulty with sexual arousal, inability to achieve orgasm, pain and general dissatisfaction with sex. The incidence of such side effects can range from 40 to over 80 percent (Mayo Clinic Proceedings, Sept., 2016).

“Reliable estimates of the incidence and severity of untoward experiences involving sexual desire, performance and satisfaction are difficult to obtain, however, in part because patients and physicians may be reluctant to discuss them. Accordingly, estimates of the incidence of untoward sexual experience and performance cited in product labeling, are likely to underestimate their actual incidence.”

One of the contributors to a lack of male libido could be related to medications. Not only do antidepressants like duloxetine (Cymbalta) cause sexual dysfunction in men, so do drugs for urinary difficulties brought on by benign prostate enlargement (BPH).  These would medications such as dutasteride, finasteride and tamsulosin.

Many other drugs can also contribute to low sex drive. Before a couple gives up on sex, it is important to consider medications as a factor and ask a health professional whether there are alternatives that won’t dampen desire.

Other Antidepressant Side Effects:

If a woman asks a physician for an antidepressant prescription to kill her sex drive she should know about other consequences. That’s because such drugs have a long list of side effects that are quite worrisome.

Here is an alternative to antidepressants that might be safer. A reader shared this story about female sexuality:

“I read on your website about women desperate to reduce their libido. I used to suffer from the same unwelcome sexual desires. I think my sex drive was due to excess testosterone.

“I fixed this problem by drinking spearmint tea in the morning and the evening for several weeks. Spearmint is available in health food stores or Latino groceries, where it is sold as yerba buena”.

We were surprised to read that in Turkey, mint tea has a reputation for lowering libido. Animal research suggests that it may have an impact on testosterone.

Spearmint tea seems much less likely to have undesirable side effects than certain other remedies people have tried, including saltpeter, chaste tree berry or licorice.

Licorice to Lower Libido is Risky

Another Option re: Female Sexuality: 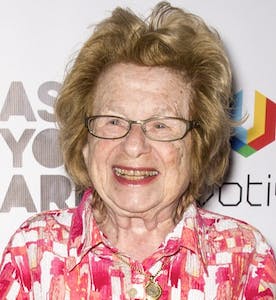 Perhaps a better solution would be to ask your partner to listen to our interview with Dr. Ruth. We talked with her on the radio about exactly this problem. Her suggestion: have the partner satisfy the person with the stronger sex drive.

We won’t get too graphic here, but Dr. Ruth does not mince words. At her age and with her experience in sexual education, she can be surprisingly candid. In a loving relationship, the partner with the lower sex drive should be happy to help the other achieve sexual satisfaction. Here’s a link to Radio Show 680: Enjoying Sex After 50. You can listen to the streaming audio for free by clicking on the green arrow inside the black circle just under the title.

What do you do to deal with different levels of libido? We would like to see your story. Post a comment below and share your own experience with this common problem. There are hundreds of comments. Take a few minutes to read some of these poignant stories. Here is just the tip of the iceberg:

“I am 50 going for 51. I was divorced and single for four years. Then I got married to a wonderful man. I love my husband so very much.

“My physical drive for sex has not diminished. I feel lost and would rather stop my need to be pleased rather than be rejected. I experience pain and am left frustrated and in tears.

“I tried to inquire if I was asking too much of him. He says no, that he loves me, but he has to be in the mood and that is infrequent. I am going crazy. We have been married over a year and the sex part of our relationship is becoming more and more difficult.”

Tracy is also in a challenging situation:

“I feel I’m in the same situation as many of the women who have shared their stories on this website. I am more than happy to have sex once a week, but my husband shows no interest anymore. If I try to initiate something, he pushes me away and makes excuses. He blames stress a lot of the time.

“The only time he tries to initiate sex is after he’s been drinking. I feel he needs alcohol to want me.

“Am I greedy thinking I have needs too so he should at least try occasionally to satisfy my needs? Maybe I need something to lower my sex drive. Who knew at 43 I’d be the one not having sexual relations.

“Except for sex we have a great relationship.”

“The sex is fantastic but even he doesn’t want it as often as I do. I still feel such a deep rejection, and it brings up so much disappointment and insecurity. At times I feel that my sex drive is a curse. I will try the spearmint tea and see if it helps.”

Rate this article
3.9- 257 ratings
About the Author