The Dangers of Diclofenac and Other NSAID Pain Relievers

A Danish study reviews the dangers of diclofenac and finds that it can harm the heart and digestive tract. Are topical NSAIDs like Voltaren Gel any safer?
The Dangers of Diclofenac and Other NSAID Pain Relievers
4.4- 135 ratings
Arrhythmia (irregular heart rhythm)

Doctors love NSAIDs (nonsteroidal anti-inflammatory drugs). That’s largely because they don’t have a lot of other tools in the toolkit when it comes to treating pain and inflammation. Opioids have been demonized and doctors have been chastised if they prescribe hydrocodone or oxycodone for chronic pain. As a result, 60 million prescriptions are dispensed annually for drugs like meloxicam, naproxen, diclofenac, celecoxib, nabumetone and indomethacin. A large study from Denmark reports that diclofenac (Cataflam, Voltaren) is associated with serious cardiovascular complications (BMJ, September 4, 2018). What should you know about the dangers of diclofenac? Are topical diclofenac gels and creams (Pennsaid, Voltaren Gel) safer than oral formulations?

What Are the Dangers of Diclofenac?

Oral diclofenac is available without a prescription in most European countries. In the U.S. it is only available by prescription, though similar drugs (ibuprofen and naproxen) are sold over the counter.

Danish scientists wondered whether oral diclofenac carried risks similar to those of rofecoxib (Vioxx), which was pulled off the market in 2004 because it was linked to excess heart attacks and strokes. They analyzed data from the Danish National Health Service which keeps records on all Danish citizens.

The researchers found that people taking diclofenac were 50% more likely to experience a serious adverse event than those who were not taking any pain relievers. The complications included the heart rhythm disturbances (atrial fibrillation or flutter), clotting strokes, heart failure, heart attacks and cardiac death. They were also more likely to experience such side effects than people taking the other pain relievers.

The dangers of diclofenac began to show up within the first 30 days of treatment. Even low doses posed a risk. This contradicts the perception that short-term treatment is safe.

In their own words the researchers offer the following observations:

“In our study, we found that diclofenac initiators [when people start taking diclofenac] were at increased risk of major adverse cardiovascular events—both compared with no NSAID initiation, initiation of paracetamol [acetaminophen] as an analgesic alternative to NSAIDs, as well as initiation of other traditional NSAIDs. Risk estimates compared with no initiation, paracetamol initiation, and ibuprofen or naproxen initiation increased for almost all individual components of major adverse cardiovascular events (that is, atrial fibrillation or flutter, ischaemic stroke, heart failure, acute myocardial infarction [heart attack], and cardiac death). The risk increase applied to men and women of all ages.”

The Dangers of Diclofenac for the Digestive Tract:

It’s not just the heart and cardiovascular system that’s at risk from NSAIDs. Gastroenterologists have long recognized that drugs like diclofenac, ibuprofen, meloxicam and naproxen can cause serious ulceration and hemorrhage of the stomach and small intestine. The Danish investigators noted that diclofenac and naproxen were both associated with upper gastrointestinal bleeding at a rate 4.5 times higher than that of people not taking pain relievers.

“It is time to acknowledge the potential health risk of diclofenac and to reduce its use…Our data support that initiation of diclofenac poses a cardiovascular health risk, both compared with no use, paracetamol use, and use of other traditional NSAIDs.”

Other Dangers of Diclofenac:

What About Topical Diclofenac? 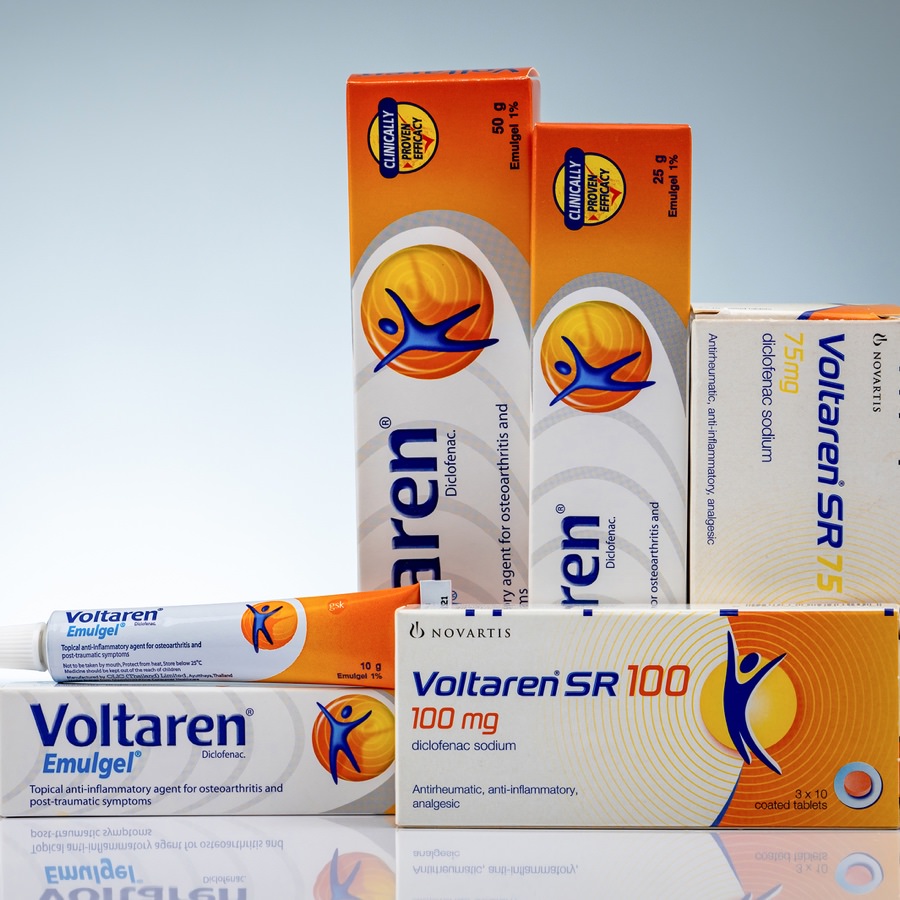 There is surprising controversy about the safety and effectiveness of topical NSAIDs. The Food and Drug Administration has a black box warning with Voltaren Gel:

“Nonsteroidal anti-inflammatory drugs (NSAIDs) cause an increased risk of serious cardiovascular thrombotic events, including myocardial infarction and stroke, which can be fatal. This risk may occur early in treatment and may increase with duration of use [see Warnings and Precautions.”

“NSAIDs cause an increased risk of serious gastrointestinal (GI) adverse events including bleeding, ulceration, and perforation of the stomach or intestines, which can be fatal. These events can occur at any time during use and without warning symptoms. Elderly patients and patients with a prior history of peptic ulcer disease and/or GI bleeding are at greater risk for serious GI events.

In other words, the FDA makes little distinction between the dangers of diclofenac gel topical formulation and oral diclofenac. This differs dramatically from an overview published in the Journal of Pain and Palliative Care Pharmacotherapy (June, 2017):

“Oral Versus Topical Diclofenac Sodium in the Treatment of Osteoarthritis”

“…our narrative review suggests that the topical solution had a better tolerability property than oral Diclofenac sodium, especially due to side effects of gastrointestinal bleeding with the utilization of the oral format. In addition, the topical route may be considered a reasonable selection by clinicians for management of musculoskeletal pain in those patients with a history of potential risk and adverse side effects. Most studies reviewed comparing oral versus topical solution of Diclofenac sodium revealed comparable efficacy, with minimal side effects utilizing the topical route.”

The Danish investigators recommend that oral diclofenac should not be available over the counter. Of course, in the US it is not, but both ibuprofen and naproxen are. The Danish study showed that the risks of gastrointestinal bleeding from naproxen are equivalent to those from diclofenac. And although the cardiovascular risks of diclofenac appeared slightly higher in this study than those of ibuprofen or naproxen, all NSAIDs can cause similar harms. We hope that people will use such medications only when absolutely necessary and treat them with the respect that is due potentially deadly drugs.

We think that topical NSAIDs in general and diclofenac in particular represent an interesting option. There are dangers of diclofenac with both the oral and the topical route. Some people are incredibly sensitive to NSAIDs. You can read more at this link:

“I have been taking Diclofenac Sodium Topical Gel 1% for two months on the side of my knee – it is working. I do not have any side effects from it.”

“I use Voltaren gel for my knee pain and it has been a miracle drug for me. I assume the Danish study was done with oral medication. The gel applied topically would be a lot less dangerous I hope.”

You are quite right Mary. The Danish study involved oral NSAIDs. The FDA does not make a distinction, though.

“I was traveling in Italy this summer and my knees starting acting up. Slow walking in museums is hard on my legs. I am not supposed to take oral NSAIDs like ibuprofen, but my doctor said that it would be OK if I used topical diclofenac for a few days while traveling. I bought a large tube of Voltaren Gel over the counter for under $14. It worked great. I don’t understand why I can’t buy it the same way in the U.S.”

Topical NSAIDs Not Safe for Everyone!

Karen is super sensitive to NSAIDs:

“Recently I was prescribed topical Voltaren gel for pain in my midfoot area. I am unable to take NSAIDs because after a day or two my stomach hurts. I noticed within a day or so of applying the gel (twice a day as directed) I began to have similar GI symptoms. Do you think that’s a coincidence?”

Other readers have shared related reactions Here is a somewhat similar story from Rosanna:

“My orthopedic doctor prescribed diclofenac gel for my knee pain because I cannot tolerate NSAIDs. I have only applied it three times to my knees. Now I am suffering from acid reflux and a burning sensation in my digestive tract. I was told it was safe. I now know it is not and will stop using it. I am distressed that my physician thought this topical NSAID was safe for me.”

It is clear that some people do develop side effects from topical NSAIDs. The active ingredients can be absorbed into the blood stream. Here is a link to more such reports.

Even Topical NSAIDs Have Side Effects

That said, oral NSAIDs seem to us to be riskier because of greater systemic absorption. We’re not sure why topical diclofenac is not available without a prescription in the U.S. That is also true of other NSAIDS. The FDA works in strange and mysterious ways.

Share your own experience with oral vs. topical NSAIDs in the comment section. Have you ever tried Voltaren Gel or Pennsaid? How well did these products work? Did you experience any adverse reactions?

Rate this article
4.4- 135 ratings
About the Author