The Shocking Results of a Heart Stent Experiment

People who have chest pain after exercise often get an angiogram. If there is narrowing in an artery they may be told they need a heart stent. Is that true?
The Shocking Results of a Heart Stent Experiment
4.9- 25 ratings
Angina

More than half a million Americans and Europeans undergo angioplasty and a receive a heart stent in one or more coronary arteries annually. The cost of this procedure can vary enormously in the U.S. Estimates run from $11,000 to $50,000 depending upon the location and the institution. Some hospitals charge substantially more. Are all these “interventions” necessary? A new British study suggests not really.

What is a PCI Heart Stent Procedure?

Doctors call this procedure PCI or percutaneous coronary intervention. Another name for it is coronary angioplasty. According to the National Heart Lung and Blood Institute:

“PCI requires cardiac catheterization, which is the insertion of a catheter tube and injection of contrast dye, usually iodine-based, into your coronary arteries. Doctors use PCI to open coronary arteries that are narrowed or blocked by the buildup of atherosclerotic plaque. PCI may be used to relieve symptoms of coronary heart disease or to reduce heart damage during or after a heart attack.” 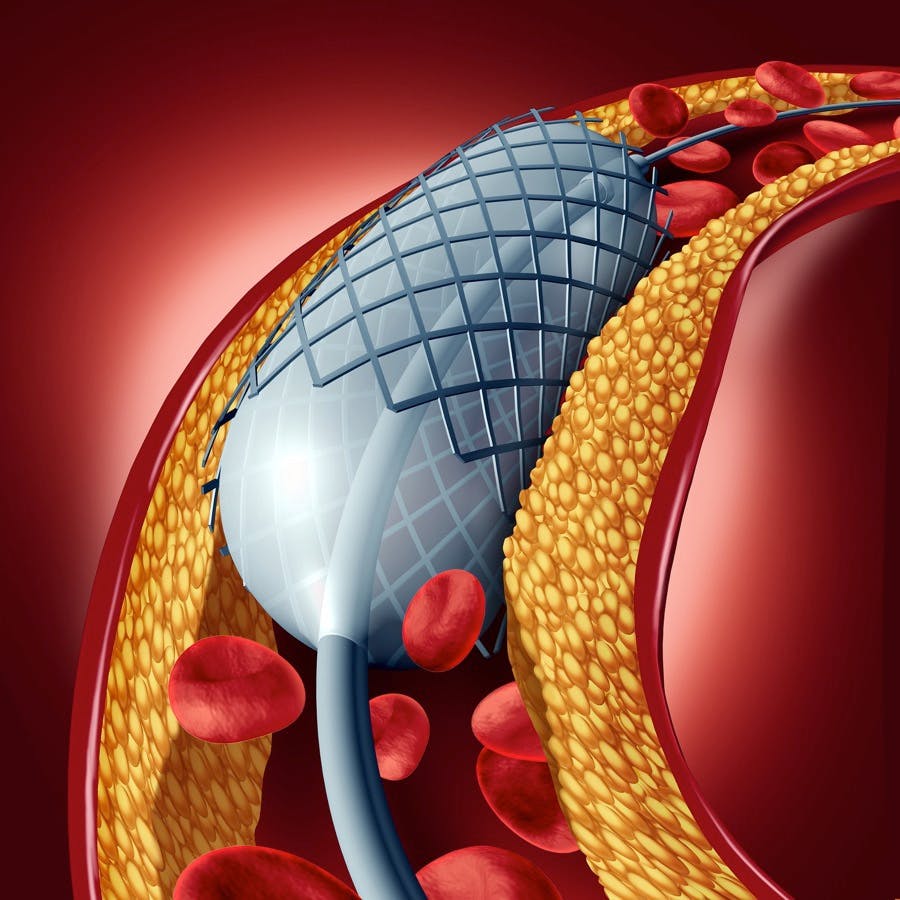 Angioplasty and stent concept as a heart disease treatment symbol with an implant in an artery that has cholesterol plaque blockage being opened for increased blood flow as a 3D illustration.

The research published in The Lancet (online, Nov. 2, 2017) suggests that when these tiny mesh tubes are inserted in arteries to relieve chest pain, they work no better than placebo. Cardiologists in Britain undertook a fascinating study called ORBITA (Objective Randomised Blinded Investigation with optimal medical Therapy of Angioplasty).

This research probably would not have been approved in the U.S. That’s because most cardiologists are convinced that PCI improves symptoms and prolongs life. Performing a sham placebo procedure on heart patients would likely have been deemed unethical.

In The Lancet study 200 people with severely blocked coronary arteries and pain with exercise were treated with medications that would improve heart function. Then they were randomized to receive a stent or a sham procedure.

In the placebo arm, patients had a catheter threaded to the coronary artery and then withdrawn without a stent being placed. The patients who received stents had better blood flow to their hearts. However, six weeks after the procedure there was no difference between the two groups with respect to chest pain and exercise tolerance. Both groups reported feeling better than they had prior to the procedure. The scientists point out that this study demonstrates the importance of placebo-controlled trials for surgical procedures as well as for medications.

This is not the first time routine use of angioplasty and a heart stent has been called into question. In 2007 the American cardiology community was shaken to its core when results from the COURAGE trial were released.

Harvard Health Online summed up the results in June, 2007.

“What’s the best way to ‘fix’ a narrowed coronary artery? That question was the crux of a multimillion-dollar trial dubbed COURAGE, short for Clinical Outcomes Utilizing Revascularization and Aggressive Drug Evaluation. Its results, presented in the spring of 2007, stunned some doctors and seemed to shock the media, but we hope they won’t come as a surprise to readers: For people with stable coronary artery disease (clogged arteries nourishing the heart), artery-opening angioplasty was no better than medications and lifestyle changes at preventing future heart attacks or strokes, nor did it extend life.”

Prior to COURAGE, many interventional cardiologists encouraged patients to undergo angioplasty and have a heart stent placed inside a narrowed coronary artery. This was often an easy sell. That’s because a coronary angiogram (an X-ray using special dye) frequently revealed restricted blood flow. When a cardiologist pointed to such narrowing he might say something scary like, “you’re a heart attack waiting to happen.” Who wouldn’t want a procedure that would open the artery and prevent a heart attack?

“…while stents unquestionably save lives of patients in the throes of a heart attack or a threatened heart attack, there is no convincing evidence that stents reduce heart attack risk for people suffering from the chest pains known as stable angina. These are people who feel tightness or discomfort walking up a hill, for example, because a partly blocked coronary artery is depriving their heart of blood. But the pain or tightness goes away if they stop and rest or just stay still.”

Even after the COURAGE study many interventional cardiologists justified their enthusiasm for heart stents on the grounds that they would improve blood flow to the heart, ease symptoms of angina and improve exercise performance. Many patients have found such arguments quite convincing. That’s why the new ORBITA study from Britain will likely be met with resistance from many in the cardiology community.

Two distinguished cardiologists wrote a comment in The Lancet that accompanied the latest research. Dr. Rita Redberg is a cardiologist at the University of California, San Francisco and editor of JAMA Internal Medicine. Dr. David L. Brown is a professor of medicine in the Cardiovascular Division of Washington University School of Medicine in St. Louis. The title of their comment is:

“Last Nail in the Coffin for PCI in Stable Angina?”

” We commend them for challenging the existing dogma around a procedure that has become routine, ingrained, and profitable. The results of ORBITA show (once again) why regulatory agencies, the medical profession, and the public must demand high-quality studies before the approval and adoption of new therapies. These ORBITA data put PCI in the category of other abandoned therapies for cardiovascular disease…”

The commenters go on to challenge established guidelines:

“The implications of ORBITA are profound and far-reaching. First and foremost, the results of ORBITA show unequivocally that there are no benefits for PCI compared with medical therapy for stable angina, even when angina is refractory to medical therapy. Based on these data, all cardiology guidelines should be revised to downgrade the recommendation for PCI in patients with angina despite use of medical therapy. ORBITA highlights the importance of including sham controls and double blinding in a trial to avoid being fooled by illusory improvements due to the powerful placebo effect of procedures such as PCI.”

Brown and Redberg entourage their medical colleagues to treat patients who have stable angina with appropriate medications instead of PCI. In addition, they emphasize the value of lifestyle changes, “including heart-healthy diets, regular physical activity, and abstention from smoking.”

Angiograms, angioplasties and heart stents are highly prized procedures. They bring in substantial amounts of money to hospitals across the U.S. Helping patients develop healthy eating habits requires a lot of time. It does not get rewarded by insurance companies or hospital bean counters. Effective exercise programs and stop-smoking clinics are far less lucrative to hospitals than interventional cardiology programs.

If doctors are rewarded for doing procedures they will continue to do procedures. If instead they were equally rewarded for helping people develop healthy lifestyles, they just might begin to adopt the recommendations of Drs. Brown and Redberg.

A Final Word of Caution:

The ORBITA trail only studied what doctors call “stable angina.” That means chest pain that shows up after exercise or stress. It is often eased with drugs that open coronary arteries such as nitroglycerin.

“Unstable angina” is a whole different situation. This may also be called acute coronary syndrome. When patients develop chest pain for the first time or while resting it could be the early signs of a heart attack. This is especially true if the symptoms get worse.

Seek immediate medical attention if you experience new or unusual chest pain. Other symptoms to be alert for include shortness of breath, sweating, pressure around the neck or jaw and pain that travels down the arm. Keep in mind, though, that a heart attack can produce atypical symptoms. When in doubt, do not delay! Angioplasty and a heart stent can be life saving in the case of a heart attack.

If you have serious reservations about the ethics of sham surgery, you need to read an article we wrote on this topic awhile back. During the middle of the 20th century many heart surgeons performed a procedure called mammary artery ligation. In other words, they tied a knot in an artery in the chest. It was supposed to ease symptoms of angina. Find out what happened when it was actually tested in a placebo-controlled manner at this link:

Rate this article
4.9- 25 ratings
About the Author