Hypothyroidism is almost an epidemic in the United States. That’s because roughly 20 million people have this condition. It  can produce debilitating symptoms such as fatigue, muscle weakness, muscle aches or joint pain, psychological depression, weight gain, sensitivity to cold, dry skin, hair loss, confusion or difficulty concentrating and constipation. Some drugs can trigger hypothyroidism. Surprisingly, low iodine levels can also lead to thyroid problems. A reader has revealed that a low-salt diet may also lead to low iodine levels.

Q. I’m a 49-year old male who leads a healthy life. I saw my doctor to address a lack of energy and feelings of depression. Six months ago, I started following a vegan diet. I consider myself well informed and felt I was eating a balanced healthy diet.

The blood results showed everything was fine except for thyroid markers. I was immediately put on a low dose of levothyroxine and sent for a second round of blood tests. My levothyroxine dosage has been raised, but I’m feeling absolutely no different from before. I read that iodine deficiency could contribute to thyroid problems.

Could six months of veganism have caused low levels of iodine?

A. German scientists have studied nutritional differences between vegans and non-vegans (Deutsches Arzteblatt, Aug. 31, 2020). Somewhat to their surprise, they found that most vegans had adequate vitamin B12 levels although they consumed very little in their diet. Many of the vegans in this study took vitamin B12 supplements because they were aware of that potential deficit. On the other hand, approximately one-third were deficient in iodine.

According to Dr. Tieraona Low Dog (in her book, Fortify Your Life):

“You may not know this, but iodine deficiency is the most preventable cause of brain damage in the world.”

“…Even with these enormous global health initiatives, [iodization of  salt] according to the WHO, iodine deficiency remains one of the main causes of impaired cognitive development in children. The WHO estimates that over 30 percent of the world’s population, or roughly 2.3 billion people, do not get sufficient iodine in their diets.”

This mineral is critical for healthy thyroid function.

The German researchers conclude that low iodine levels are common in the vegans they tested:

“…in one-third of the vegans, iodine excretion was lower than the WHO threshold value (<20 μg/L) for severe iodine deficiency.”

How to Overcome Low Levels of Iodine:

First, remember that iodine is essential for proper thyroid functioning. Low levels of iodine are not as easy to overcome as you might imagine. First, foods do not list iodine levels on their labels. Many people have taken to eating non-iodized salt such as sea salt or Himalayan salt. That doesn’t leave a lot of options.

The World Health Organization calls for 150 micrograms of this mineral a day. To get this amount we would suggest sticking with iodized salt.

This reader asks a question that others on a low-salt diet may find helpful:

Q. Thank you for describing how low iodine intake affects thyroid function. I have Meniere’s disease and never use salt of any kind. How else can I get iodine in my diet?

A. In the United States, salt is iodized to prevent iodine deficiency that can lead to goiter, a thyroid condition. However, people like you with the balance disorder called Menière’s disease are encouraged to restrict salt intake. As a result, you should make sure you are eating dairy products, eggs, fish or seafood. All are good sources of iodine.

You can also overcome inadequate iodine levels by consuming seaweed snacks. This is a staple in the Japanese diet, but it has not caught on in the US. That said, seaweed-wrapped Japanese rolls are catching on. Many supermarkets carry sushi rolls and they make a great luncheon snack. Shrimp, sea bass, tuna and cod all contain iodine. Even eggs contain some iodine.

You can learn more about iodine and how to overcome low levels in Dr. Tieraona Low Dog’s wonderful book, Fortify Your Life: Your Guide to Vitamins, Minerals and More. You can also learn more about low iodine and thyroid function it in our eGuide to Thyroid Hormones. This online resource is available in the Health eGuides section of this website.

What symptoms signal thyroid trouble? This extensive guide to Thyroid Hormones has critical info on testing, treatment, and side effects. 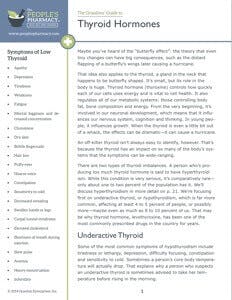