Applying hydrogen peroxide to toenails every day can help get rid of ugly nail fungus. However, this remedy requires lots of patience.
Hydrogen Peroxide For Lovely Toenails
4.1- 245 ratings
Alternative Health

Many people would like a simple, inexpensive way to treat toenail fungus. Fortunately, there are many home remedies that can prove helpful. So far as we know, there is not a single treatment that works in every case. But many people find that if they apply hydrogen peroxide daily to the affected nails they can clear the fungus.

Q. I tried your hydrogen peroxide treatment for toenail fungus and it worked like a charm.

A. The reader who suggested this remedy applied pharmacy strength hydrogen peroxide daily to the nails with a cotton ball after showering. We found relatively few scientific studies of this remedy, but one review of research included H2O2 as a way to make thick toenails more permeable. That might allow antifungal treatments to penetrate more easily (Murdan, Expert Opinion on Drug Delivery, Nov. 2008).

Other Remedies for Lovely Toes:

Other simple remedies for treating nail fungus include vinegar or old-fashioned amber Listerine mouthwash. Usually people soak their feet in a solution that contains a third to a half vinegar or Listerine and the rest water. Readers trying any of these soaks must be patient. Toenails grow slowly, and the fungus won’t be gone until the nail has grown out completely free of fungus. That could take up to a year.

Many readers have found that applying Vicks VapoRub to the nails daily or twice a day can overcome toenail fungus. One clinical case series supports this home remedy for toenail fungus (Derby et al, Journal of the American Board of Family Medicine, Jan-Feb. 2012). Nurses also report that this treatment is safe and can be effective (Snell et al, Journal of the Association of Nurses in AIDS Care, Jan-Feb. 2016).

We heard from one reader who used “white” iodine to good effect:

Q. I found decolorized iodine works remarkably well for toenail fungus. Applied to the top of the nail and around the cuticle, it dries quickly and does not stain stockings or bedding. Cost: about $2.50.

I used it five times a week starting out. After the nail was once again normal, I started using it about once a week for maintenance and prevention. I don’t want ugly toenails ever again.

A. Iodine has broad-spectrum antibacterial activity that has been recognized since the early 19th century. It also is active against yeast, mold, viruses and fungi. Readers have reported that iodine can be effective against warts and nail fungus. 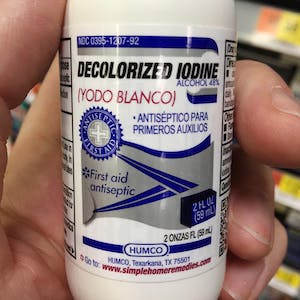 Drawback to Tincture of Iodine:

Tincture of iodine stains the skin and nails brown, which is why people prefer decolorized iodine. We discuss this and many other remedies for nail fungus in our Guide to Hair and Nail Care.

Rate this article
4.1- 245 ratings
About the Author