Goldenseal is a native North American herb that has a reputation for boosting the immune system.
Goldenseal
5- 1 rating
Herb Library

Goldenseal (Hydrastis canadensis) is a perennial plant that grows wild in wooded areas of North America, from New England to the southern Appalachians, and west to Arkansas and Minnesota. The Cherokee and the Iroquois had many medicinal uses for goldenseal.
Settlers learned some of these traditions, but surprisingly little research has been conducted on the plant (once called yellow root, ground raspberry, or Indian dye). It was a popular ingredient in patent medicines, branded mixtures often sold by traveling medicine shows, after the Civil War.

The use of goldenseal is controversial because the plant has become rare in many areas where it once grew abundantly. “Boom and bust” cycles of goldenseal growth and collection were noted by wildcrafters as long ago as the late nineteenth century, and they continue to this day.

The situation became more acute at the end of the twentieth century, however, and goldenseal has been listed in the Convention on International Trade in Endangered Species (CITES). It has been suggested that this regulatory action may have actually been an overreaction to a predictable cyclical shortage rather than a true population decline. The popularity of goldenseal in the aftermath of the DSHEA legislation of 1994 suggests, however, that there might be a potential for overexploitation of this native herb, justifying CITES protection and conservation efforts. Goldenseal was the fourth most widely sold herb in natural food outlets in 1997.

The part of the plant that is used is the bitter-tasting rhizome (“root”). 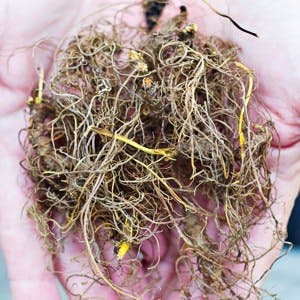 Goldenseal is frequently sold in combination with echinacea as a nonspecific immune booster. It is unclear whether such a combination is more effective than either herb alone.

Marcey Shapiro, M.D., has suggested that in most cases the benefits of goldenseal might be better gained by using other plants with similar constituents, such as Oregon grape, barberry, and gold thread.

The principal components of goldenseal thought to be responsible for its physiological actions are the alkaloids hydrastine (present at concentrations from 2 to 4 percent) and berberine (from 2 or 3 up to as much as 6 percent). Other alkaloids found in lower concentrations include canadine and hydrastanine. Three sideroxylin flavonoids have been identified as synergistically enhancing the antimicrobial efficacy of berberine, though they have none themselves (Journal of Natural Products, July, 2011).

Goldenseal root has a reputation for being a “natural antibiotic.” Native American groups used it topically for inflammation, and it has been used in folk medicine as an eyewash and a rinse or gargle to relieve sore mouth, sore throat, canker sores, or thrush. No clinical studies confirm its effectiveness for these purposes.

Several Indian tribes used it for digestive disorders, and berberine has proved effective in treating diarrhea due to toxic pathogens such as cholera. In another study, it was more helpful than placebo against giardia infections in children.

Hydrastine and berberine lower blood pressure when injected into laboratory animals. Berberine can increase the secretion of bile, and canadine is reported to trigger uterine contractions.

In mice, goldenseal ingredients increase blood flow to the spleen and stimulate the activity of macrophages, blood cells that are an important part of the immune system.

This herb is sometimes used as an “alternative medicine” for strep or sinus infections.

It has been considered for the treatment of certain cancers or HIV, but these uses are experimental, unconfirmed and probably ill-advised.

Several goldenseal compounds, including berberine and canadine, have been shown to lower LDL cholesterol (Journal of Lipid Research, Oct., 2006).

Goldenseal’s reputation for masking illegal drugs in the urine is completely undeserved. This property is extrapolated from a mystery novel written by an herbal product manufacturer, John Uri Lloyd, at the turn of the century.

His plot called for goldenseal to be confounded with the poison strychnine, but the leap to using the herb to avoid detection of drugs in the urine is presumably a creative work of fiction. Despite this, scientists have developed a sensitive analysis technique using chromatography to detect goldenseal-derived alkaloids in urine (Journal of Chromatography. B, Analytical Technologies in the Biomedical and Life Sciences, Jan. 1, 2012).

Pregnant women should avoid goldenseal because of evidence that it can stimulate uterine contractions in animals.

It is inappropriate for newborn babies.

People with heart conditions, bleeding abnormalities, and epilepsy are advised to avoid goldenseal because of its potential to cause serious adverse reactions.

Despite its history as an eyewash, goldenseal solution should not be placed in the eyes. Doing so could expose both the lens and the retina to light-induced damage (Photochemistry and Photobiology, Jul-Aug, 2007).

It has been reported to irritate the mouth.

Steven Foster suggests that such warnings are due to a misinterpretation of a nineteenth-century text on homeopathy; nonetheless, there are reports of people who have experienced a sore, irritated tongue resulting from taking goldenseal.

Considering that there is such uncertainty about the severity of potential side effects, it is wise to avoid high doses or prolonged administration.

Rate this article
5- 1 rating
About the Author