Coconut for Crohn’s Supported by Science

For two decades we have heard from readers about the value of coconut for Crohn's Disease. Now we have a plausible explanation for why this remedy works!
Coconut for Crohn’s Supported by Science
4.7- 50 ratings
Crohn’s Disease

In 1998 we received an intriguing letter from a reader of our syndicated newspaper column. Donald Agar, from Pittsfield, MA, contacted us to say he had finally overcome a long-standing battle with inflammatory bowel disease. His secret: Coconut for Crohn’s disease. Now researchers have come up with a possible explanation for why coconut might have been so successful for Mr. Agar.

Don was born on August 6, 1932. When his beloved wife Joan died, Don had to fend for himself. That meant shopping and cooking for himself. It was his choice of dessert that led to this letter to The People’s Pharmacy in 1998:

“I have had Crohn’s disease for 40 years, and during that time I have had a never-ending battle with diarrhea. Lomotil helps some, but it doesn’t eliminate the problem.

“Three months ago, I bought a box of Archway Coconut Macaroon cookies. I’ve been eating two a day and I have not experienced diarrhea in that time. If by chance I eat three in a day, I get constipated. Believe me, I have a new life now.

“My brother-in-law has a friend who just had cancer and suffered diarrhea as a consequence of the operation. We told him about the cookies and they corrected his diarrhea. I would be delighted if others were helped by my discovery, too.”

People with Crohn’s disease have an inflammatory condition that can make their lives miserable. For reasons that remain mysterious, the immune system attacks the gastrointestinal tract. This onslaught can lead to abdominal cramping, frequent diarrhea, unexplained weight loss, fatigue and fever.

Inflammation within the digestive tract can lead to ulceration and scar tissue. Rectal bleeding is not uncommon. Clearly, this form of inflammatory bowel disease requires expert care from a gastroenterologist.

Some people become prisoners in their own homes. One person described the situation this way:

“I was afraid to go anyplace because I never knew when I’d get an uncontrollable attack of stomach cramps and diarrhea. Sometimes I’d have 4 to 5 ‘Montezumas’ in a day. Even being at home, I couldn’t always make it to the john on time. I had to do a lot of laundry for a year. The floor got washed more than usual as a result of my accidents. I went to a couple of different doctors and got various prescriptions. No, they did not work.”

Usually Crohn’s is treated with drugs that can reduce inflammation. These may include corticosteroids like prednisone. During an acute flareup, corticosteroids may need to be injected intravenously or administered rectally. Long term treatment with steroids carries significant risks. Here is a link to this “deal with the devil.”

Donald Agar was prescribed so much prednisone over the 40 years he struggled with Crohn’s that he developed osteoporosis. He had to have two hip replacement surgeries as a consequence of the steroid’s negative impact on bone.

Biologics That Suppress the Immune Reactions:

These drugs are prescribed to damp down an overactive immune response. They include drugs like:

To learn more about the pros and cons of these TNF (tissue necrosis factor) blockers, go to this link.

Doctors also prescribe antibiotics like ciprofloxacin (Cipro) or metronidazole (Flagyl). They too have some unpleasant side effects. Read more at this link. Sometimes surgery is required when all else fails. 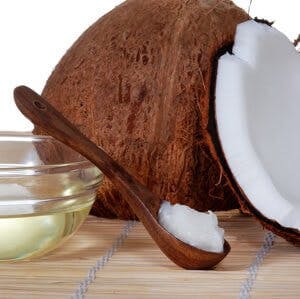 A study in mice suggests that changing the diet might be beneficial in treating Crohn’s. These mice with intestinal inflammation were fed a high-fat diet. The fats used were derived from plants and included coconut oil and cocoa butter. This diet changed their microbiome (bacterial ecology) significantly and reduced the inflammation found in their digestive tract.

So far, this research has been done only in mice. The researchers anticipate identifying the beneficial bacteria and offering them as probiotics to Crohn’s disease sufferers. They will also be conducting research to see whether coconut oil or cocoa butter are helpful in the diet of these patients.

What’s Going On with Coconut for Crohn’s:

Over the last two decades we have received hundreds, if not thousands, of messages about the value of coconut for Crohn’s disease. Until this week we didn’t have a great explanation for how this remedy might be working.

People suggested that there was something in coconut oil that had anti-bacterial activity. They speculated that this compound might suppress the microbes that were causing an overactive immune reaction. Lest you think this is all nonsense, here is a link to an article demonstrating that virgin coconut oil (VCO) does indeed have antibacterial activity against the bad actor Clostridium difficile (C. diff). It was published in the Journal of Medicinal Food (Dec. 2013).

Now we suspect that specialized fats in coconut may also modify the bacterial balance within the bowels. Mice fed coconut oil or cocoa butter were reported to have less inflammation within their intestinal tracts.

Stories from Readers: Coconut for Crohn’s

Not everyone benefits from coconut. Some people are disappointed that their symptoms do not respond to coconut macaroon cookies. Others, though, have been delighted with the outcome. Here are just a few reports and some links to articles you may find of interest.

“Archway-brand coconut macaroons absolutely work! Best tasting medicine ever. Two cookies will quell the worst attack-better than any drug that I have tried!

“I lost my entire summer due to Crohn’s disease and diverticulitis. I have used Imodium daily for at least last 5 years. When my daughter told me to give macaroons a try, I thought, oh well. BUT SHE WAS SO CORRECT. It has stopped the diarrhea. Thank you, Archway.”

Not Just Coconut for Crohn’s:

“I had gallbladder removal and was shocked by the consequences. I wasn’t told about this. After every meal I had diarrhea. I have a super wife. She is my best friend. She searched the internet for information about my problem and found many others telling similar stories.

“The most effective has been the Coconut Macaroon Cookies she found at one of our two local Kroger Stores in Conway. I read on this site that Archway was out of business, BUT found that a company called HOMESTYLE had taken up the recipe. Not certain but believe it is a Kroger Generic Brand Name.”

Archway is back in business with their Coconut Macaroon Cookies. Some people prefer their brand. Others have come up with different recipes to provide coconut for Crohn’s disease.

Danii offered this variation on the theme:

“Mix oil and honey together until smooth, then add flakes. I like it more on the dry side so I add more flakes. You can shape them into balls or flatten them like thin mint cookies and place them in the refrigerator. I snacked on a few and sipped on coconut water. Diarrhea gone in a day.

“I just read about pineapple helping with the inflammation, so next time I’ll either add pineapple juice to my water or a few pineapple pieces in the the coconut treats.”

“Macaroon Cookies are too sweet for me. I prefer coconut powder over macaroon cookies. So I keep some unsweetened, 100% organic, shredded coconut in the freezer. I just take 2 teaspoons of coconut powder ( it will taste better if 1/2 teaspoon of sugar is added). It will do the job, no sweat! It works for my dogs too.

“I have found, due to a tip from People’s Pharmacy, that unsweetened shredded coconut solves this problem for me without the sugar contained in Archway Coconut Macaroons. I buy Bob’s Red Mill brand from the health food section of my super market. I mix it with yogurt – prob. 3 t per 8 oz. yogurt. I eat about 2 to 3 T of this mix with my breakfast and again at bedtime if I think of it.” 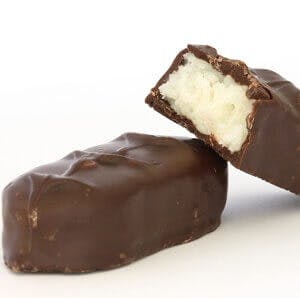 “Coconut controls my son’s ulcerative colitis. I sprinkle roughly one tablespoon of coconut flakes on his yogurt in the morning and give him an individual Mounds bar for lunch. This has worked for a few years now. We started coconut therapy after hearing your program with Donald Agar. Thank you so much.”

For those who would prefer to make their own coconut macaroon cookies, here is a recipe a listener to our radio show shared:

Mix ingredients well, drop by teaspoonfuls on greased cookie sheet and bake for 20 minutes at 325 degrees (or until lightly brown). Remove immediately from cookie sheet when done.
Carolyn from Virginia kindly shared this recipe, which her grandchildren love.

More articles about Coconut for Crohn’s:

Did Coconut Save Man’s Life?

Please vote on this article at the top of the page.

Rate this article
4.7- 50 ratings
About the Author